Posted on October 5, 2012 by droppingsully

Stan & Joes Saloon – Annapolis – Thursday, October 13th
We’re playing a new venue for us, but we’ll be sure to rock it!  If you are in the area, then swing on by.  We go on at 9:30 and will play all night.  You can join the facebook invite here. 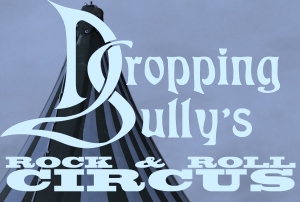 The theme is Dropping Sully’s Rock n’ Roll Circus and we will be playing The Rolling Stones’ album Beggars Banquet in its entirety.  Costumes encouraged.  Drink specials.  Hilarity and merrymaking. This is surely not to be missed.  Keep up to date on the details here.
RECORDING
We’ve put the second album on hold for a little while as we are still writing more tunes.  In the meantime, we will be releasing some live tracks that we recorded at the 8×10 last month – 4 new songs and 2 deep cuts (aka pre-Trainwreck material).  They are currently being mastered and will be released hopefully before the end of the month.  Stay tuned.  The tracks will show up on SoundCloud as well as in physical form for those that still like CDs.  Be sure to check out some of our other stuff that is currently on SoundCloud.